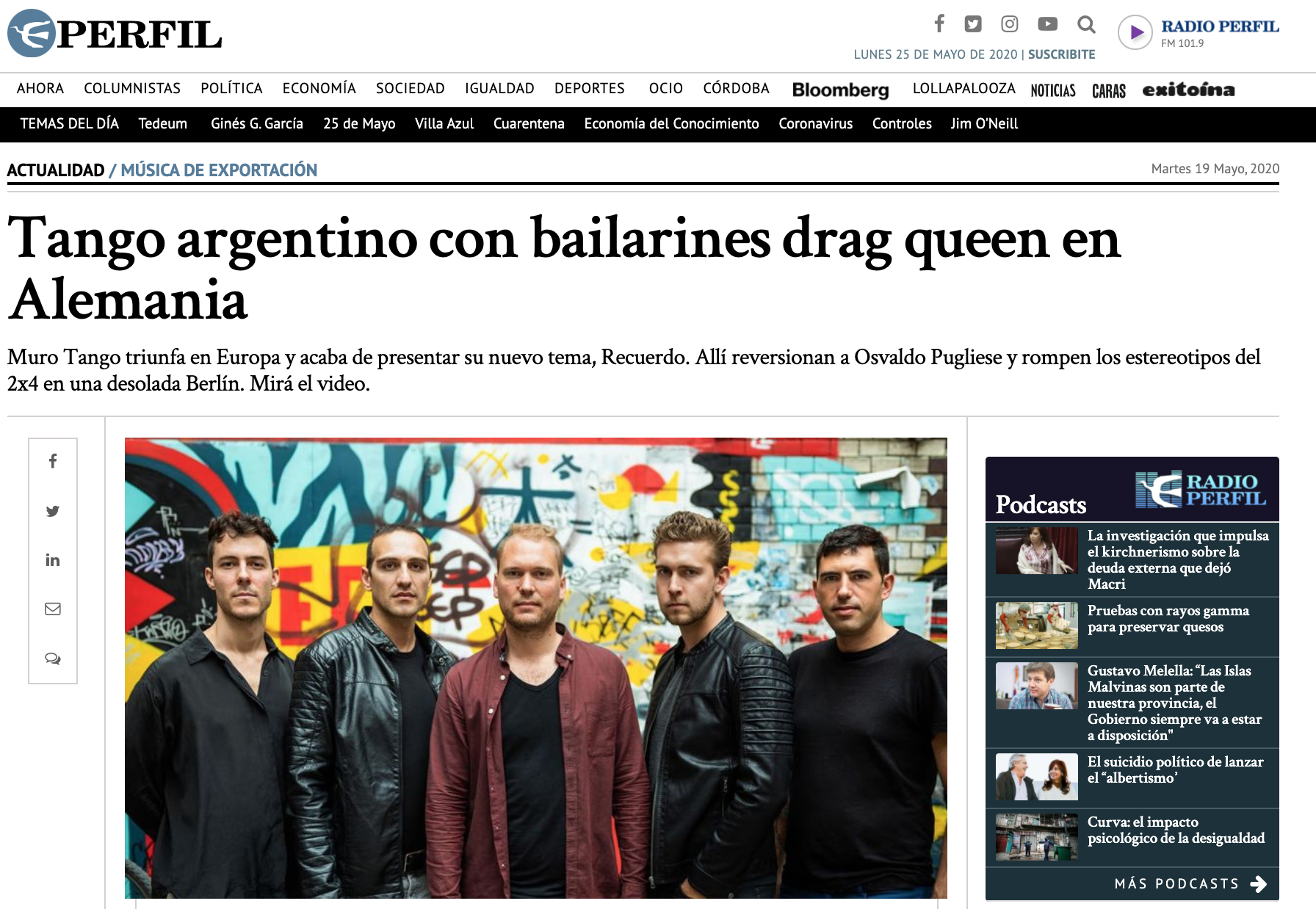 Published on May 2020 in Perfil.com. Read the original interview in Spanish.

El Muro Tango triumphs in Europe and has just presented its new song Recuerdo. There they perform Osvaldo Pugliese´s song and break the stereotypes of 2×4 in a desolated Berlin. Watch the video.

A semi-deserted Berlin and two drag dancers following the footsteps of the 2X4. There is no doubt: El Muro Tango has no problem in breaking patterns. That’s how this band decided to portray their new video, a new version of Recuerdo, the song of another revolutionary: Osvaldo Pugliese.

The video was filmed in March of this year, during the coronavirus pandemic with the background of social distancing in Germany.

El Muro Tango is an Argentine tango band that set out to take the international tango scene by storm. With their energetic performances, they spread enthusiasm to tango dancers and music lovers throughout Europe and South America.

Since its debut in 2016, the group has toured the world and played to a full house at prestigious festivals and concert halls such as the Oslo Chamber Music Festival, the Innsbruck Tango Festival, the Royal Concertgebouw and the Usina del Arte.

The band – made up of Norwegian, Karl Espegard (violin), Kaspar Uljas from Estonia (bandoneon) and Argentineans Juan Pablo De Lucca and Benjamin Groisman on piano and double bass respectively – performed in the final of the TV show Norway’s Got Talent 2018 with dance couple Cyrena Drusine & Steinar Refsdal.

They are currently working with the most important tango singers in Argentina, such as Juan Villarreal, Chino Laborde and Negro Falótico. Among its members, the DNA of the historical tango is still alive with Juan Pablo de Lucca, grandson of the renowned singer, Alberto Castillo, who was also a revolutionary in the genre for his time.

The group released its debut album “Nostalgico” at Galileo Music (DE) in November 2018. Their music consists of traditional Argentine tango with a fresh and modern harmonic language, incorporating elements of jazz and South American rhythms. 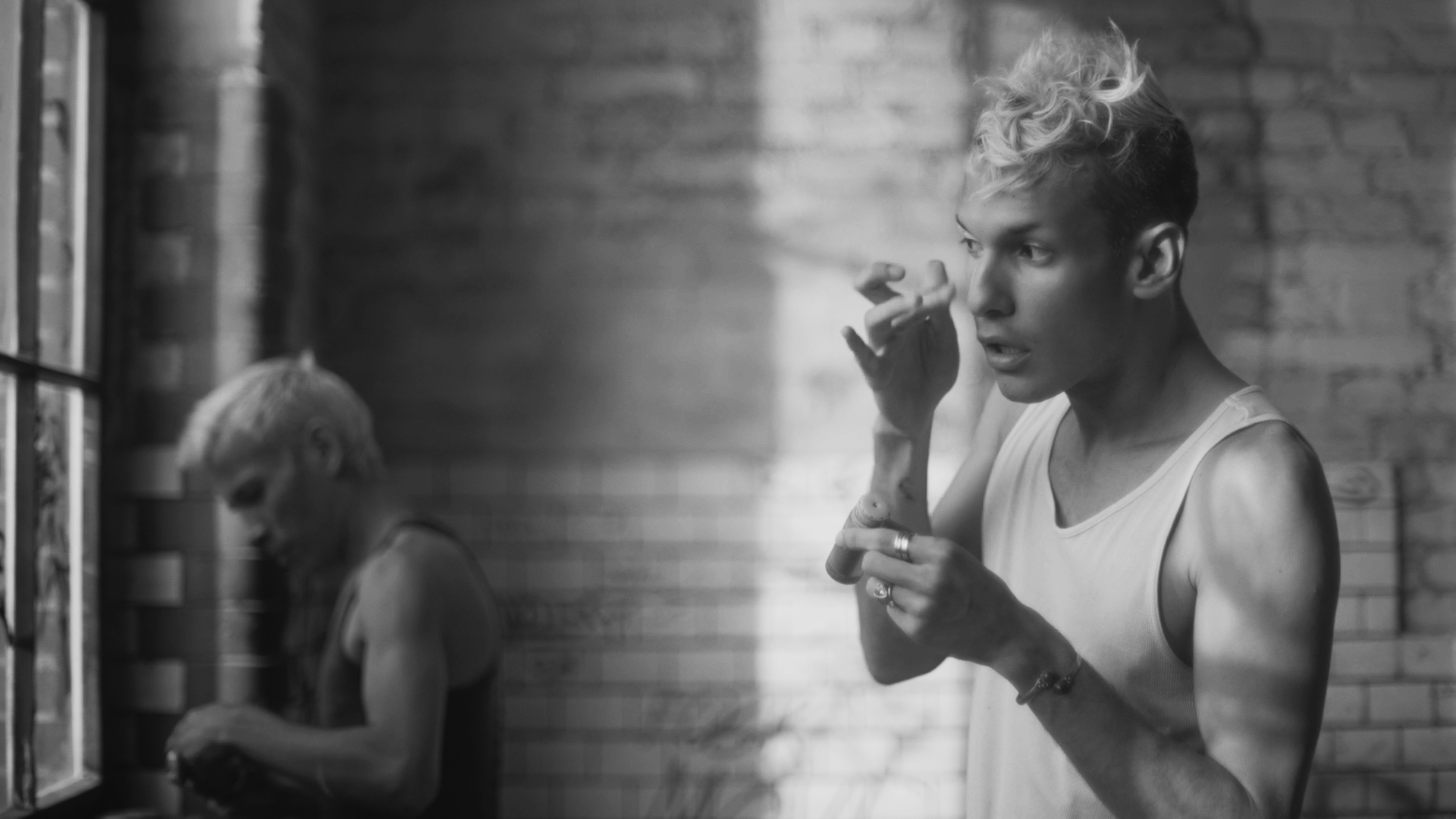 Written by Tom Pugh (author of The Devil’s Library)

A break-out sensation since emerging in 2016, El Muro Tango should be on tour, playing to packed venues across Europe. Instead, along with the rest of us, they are in isolation – but far from idle. Unable to perform live, the group has just released an extraordinary love letter to tango, the city of Berlin and their many fans. A gift for these dark times in the shape of a film set to their own mould-breaking interpretation of Pugliese’s Recuerdo (A memory).

Drawing inspiration from tango’s origins in the working-class barrios of Buenos Aires, the film builds new connections between the unbridled desire of the milongas and the rough edges of Berlin, one of the world’s great contemporary melting pots, a city of refuge for the queer community and a mecca for performers, musicians and artists.

In every movement, Argentine dancers Juampy Ramirez and Dani Arroyo convey the desire to dance, to flourish, to experience life with an intensity which nothing delivers quite like tango. Their movements are relaxed, their pauses less attention-seeking than in classical tango, as they tell a story of the triumphant pursuit of freedom of expression.

Musically and visually, it’s the story of a quest for identity, a journey across traditional boundaries of genre and gender in pursuit of a sound that represents tango’s true nature. Here, the clichés of so many contemporary recordings are blown away by a performance which acknowledges tango as something more than just a dance. El Muro Tango play it like they’re on a mission – to dive deep into tango’s origins and establish themselves as the defining influence on its still fluid identity in alternative Berlin.

Their deep knowledge and technical virtuosity are audible in every note. Not surprising given that the pianist, Juan Pablo de Lucca, is the grandson of legendary singer and actor Alberto Castillo. The musical accomplishments of his bandmates are hardly less impressive. Together, they seek to make tango transgressive, flamboyant, and dangerous again. As their instrumental interpretation of Recuerdo accompanies the dancers – reflecting on what’s been lost and what remains, hiding in plain sight on the margins, in the beauty of empty urban spaces, in the transformation of two dancers into living emblems of defiant hope – snatches of the lyrics hover like ghosts between the notes:

The result is a film which moves and connects with great intensity – and one which speaks to our current moment, as it becomes clear that even if COVID-19 doesn’t discriminate, the impact of the virus still corresponds to the inequalities in society. Those on the margins are once again among the most vulnerable – and courageous. Like Dani and Juampy, they still apply their make-up, put on their high heels, and dance.

If any contemporary band has the ambition and ability to reinvent tango and bring it to a wider audience, it’s surely El Muro Tango. With this film, they take a major step in that direction.

Read the original article in Norwegian.

In March they are playing in Buenos Aires. Saturday, June 9, El Muro comes to Bøvær and Kråkeslottfestivalen, in an all-encompassing show with instrumentalists of international class, tango dancers in the top elite, and last but not least the Argentinian star vocalist Juan Villarreal.

The judges of Norway’s Got Talent were ecstatic about the tango dancers Steinar Refsdal and Cyrena Drusine. At Kråkeslottfestivalen 2018, the two join forces with the Norwegian-Argentinian tango ensemble El Muro to a blazing show of Latin American passion.

El Muro is as exotic as a Norwegian-Argentinian tango ensemble based in Berlin. For this summers tour they have brought with them Argentine singer Juan Villareal from Buenos Aires. Here we not only get served the music, but also the lyrics; – the strong emotions, the drama, the tenderness, the unresolved love, the longing. Which then is interpreted by Steinar and Cyrena through the dance, so close to the audience that one has to take extra care not to be hit as a spike heel sweeps on by.

Kråkeslottet (The Crow Castle) has a tradition for dance – and tango in particular. One of the musicians in El Muro, trønderpia Åsbjørg Ryeng on the bandoneon, has participated in the tango project Glød, which had its premiere at Kråkeslottet. We can now already reveal that on The Night of The Dance on Saturday, where we all can let ourselves loose, there will be amazing music and it will be Latin. Including tango. We are not revealing anything more now. But just check your wardrobe to see if you can live up to the music – and the dance … The ticket sale starts Thursday 15 March at 6:00 p.m.

On Friday 12th of January at 8pm the dancers Cyrena and Steinar will perform on the Norwegian TV show Norske Talenter (Norway’s Got Talent) on TV2. There they will compete with different artists and performers to win the hearts of the norwegian people.

We are happy to announce that they will be dancing to recordings from our upcoming album. We wish them the best of luck!

We in El Muro want to thank our friends, fans and collaborators for the wonderful year we have shared together! We have fulfilled many of our goals and dreams for this year, none of which would have been possible without the support and hospitality of the many friends and collaborators across the continent! Thanks for opening your hearts to us ❤️

Merry Christmas to you all!! 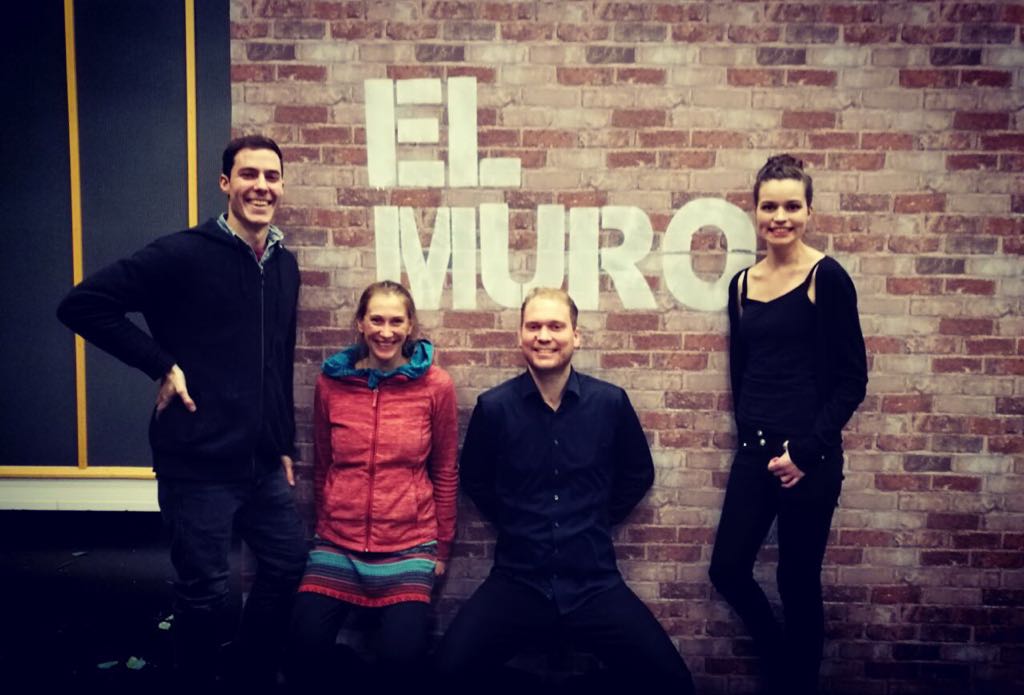 Yesterday we spent the afternoon in Lillehammer with teachers and students at the Norwegian Film School, filming 4 different songs with a full-scale TV production crew. The amount of dedication and preparation they had put in it this was astonishing! The students spent weeks in studying the scores and planning all the different shots. They had even built a set inspired by an argentine café, displaying our band name in big letters on the wall. Only thing missing was a mate and some medialunas! Thanks to Halldor Krogh for the opportunity, we are very excited to see the final results within the next couple of weeks.

It’s here!! This summer we finally recorded our first music video with in collaboration cinematographer Åsmund Hasli and dancers Cyrena Drusine and Steinar Refsdal. The location was Sinsen T-bane (metro station) in Oslo, which has a beautiful display of sunlight falling down through colored glasses in the ceiling. This gave away for some amazing colors in the background. We are very thankful to Åsmund, who has done a tremendous job filming and editing the video. If you want to see more of his brilliant work, check out http://www.asmundhasli.com/.

The audio is recorded at Urban Sound Studios in Oslo with sound engineer Thomas Wang. 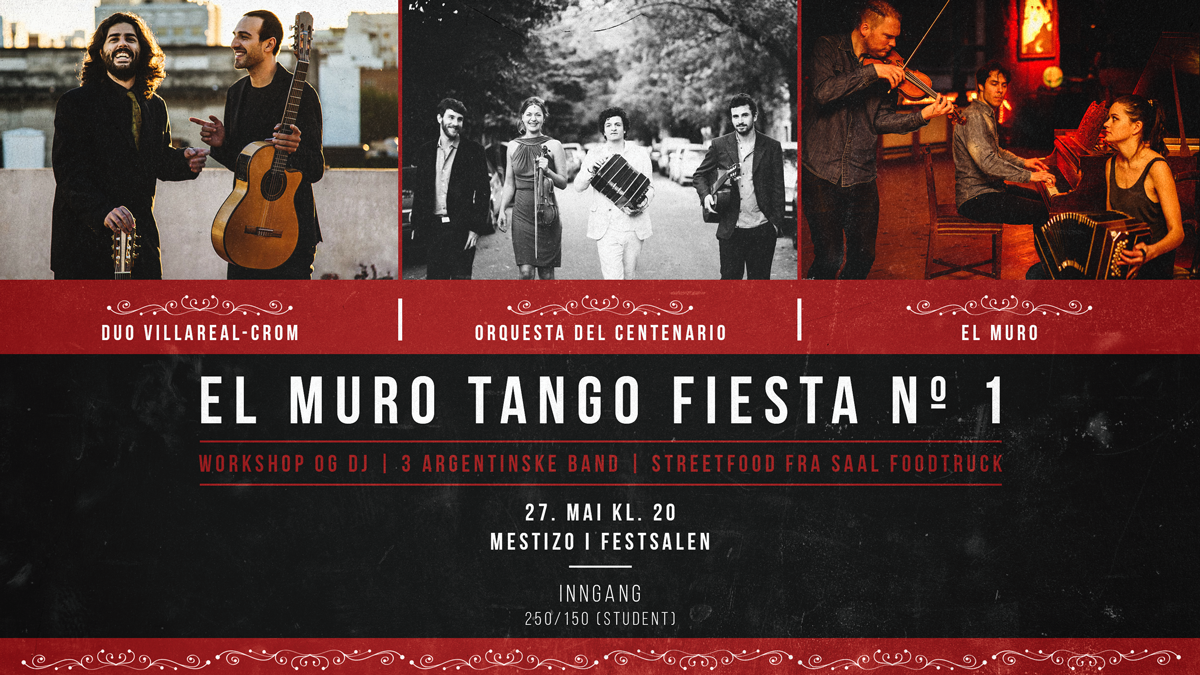 El Muro is proud to present their first tango party, cohosted with Robert Åkerberg on Saturday 27th of May. The event will take place at the new venue of Café Mestizo (Festsalen), situated in the center of Oslo near Rockefeller. No less than three Argentine tango bands will be performing at the event, two of them currently touring Europe. During the night there will be served a light meal of tasty Italian streetfood brought to you by SAAL Foodtruck. Prior to the event there will be given tango classes free of charge, further info will come soon.

Duo Villarreal Crom is on their 8th trip to Europe, giving concerts in Italy, Germany, Spain, Switzerland and Norway. The duo consists of Juan Villarreal, currently the lead singer of the renowned Orquesta el Arranque, and the guitarist Patricio Noé Crom. Together they have recorded two studio albums which are readily available on social platforms as well as iTunes and Spotify.
Video: https://youtu.be/QKVMvBgyBpY

Members of the Oslo tango community will be pleased to once again receive Orquesta del Centenario, who gave a concert at Cosmopolite in September last year during their Europe Tour 2016. This time they come as a quartet, bringing the singer Santiago Federico and the Norwegian violinist Miriam Heen Skotland on their 3rd annual trip to Europe.
Video: https://youtu.be/tL1QWE0Z-6k 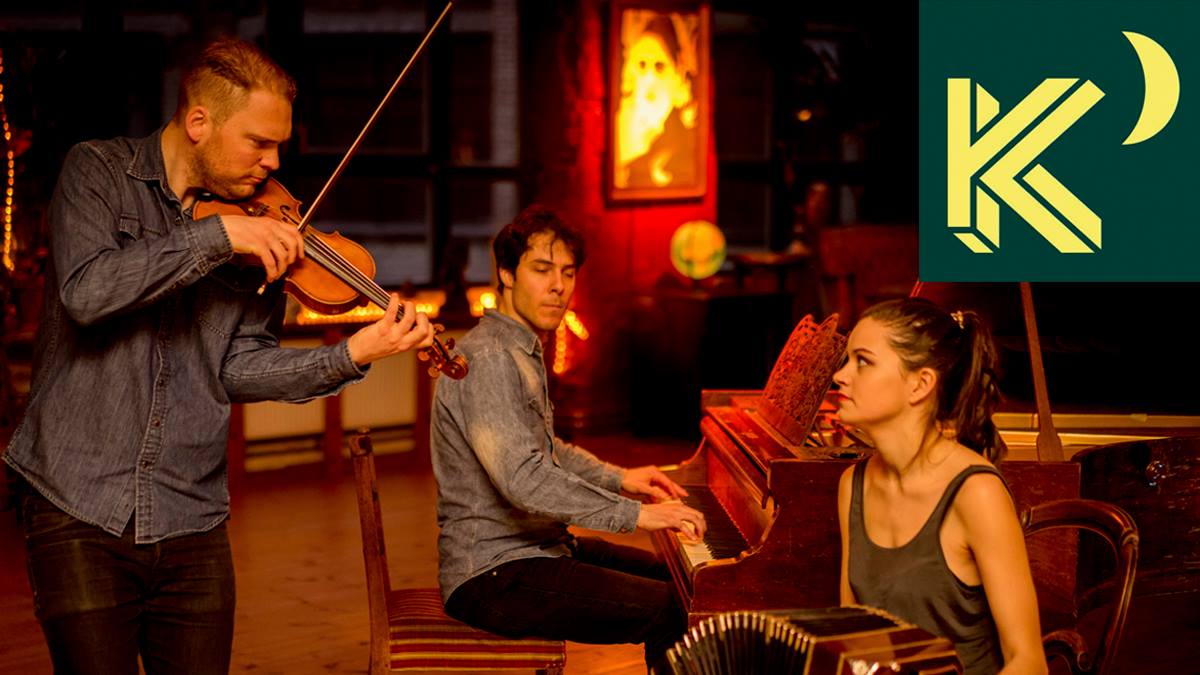 We are proud to announce our participation at Drammen Kulturnatt on the 12th of May! We’ll be performing at three different venues, of which the last one will be held at Union Scene Live. The complete program will be released soon.